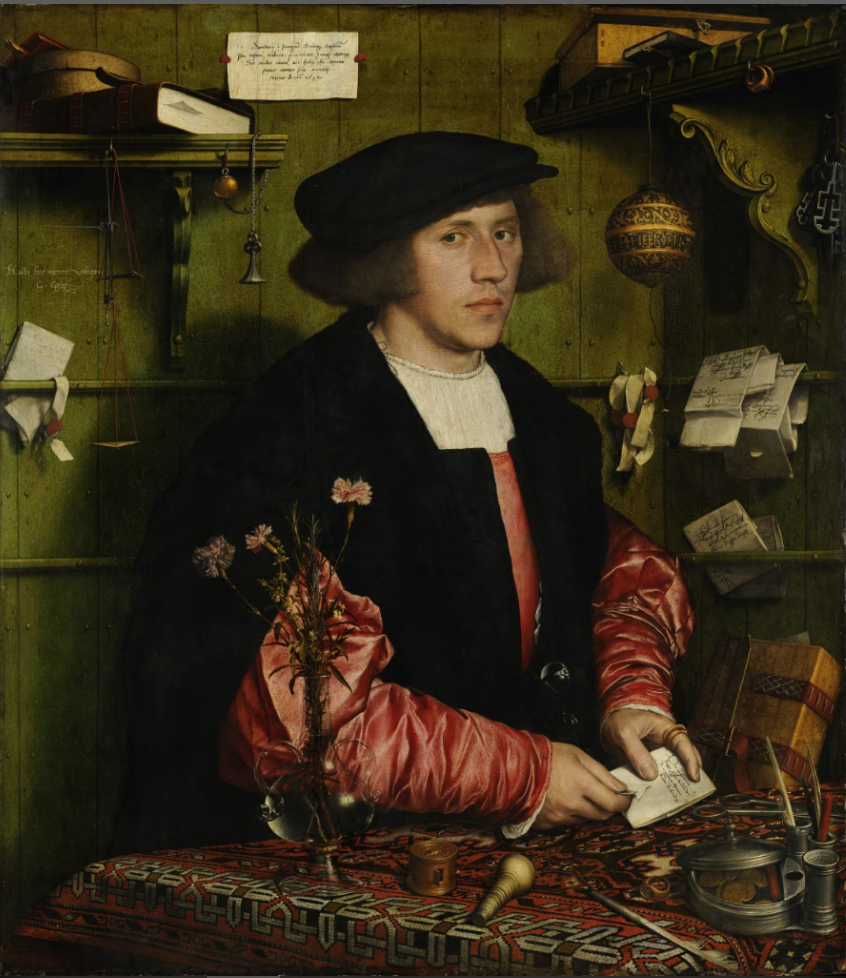 Georg Giese by Hans Holbein, the leitmotif of our website. The painting of the Danziger merchant staying in the Hanseatic Kontor in London is full of symbolism:  writing attributes, merchant books, lavish rugs and imported textiles, scales and weights all speak of the profession and standing of the depicted Georg. Yet there is more: letters, merchant marks and carnations as a symbol of the pending wedding with the daughter of a councillor point to extensive networks through family and institutions. Georg and members of these networks were more than just merchants: they were councillors, judges, burgomasters, secretaries of kings, bishops and envoys. In these capacities, they continuously managed conflicts, small- and large-scale. They balanced interests, and this balance proved at times difficult or even impossible, as Hans Holbein hinted in his painting.

'Something is wrong here. The angle of the room is not correct, the corner of the table protrudes toward the viewer in a rather weird way, and both his seal dangling at the back and lopsided scales next to it are tilted in a way that is physically impossible. They hang next to Giese’s motto: ‘No joy without sorrow’. The off-balance presentation of elements of mercantile life is not a token of a lack of skill of Holbein: quite the contrary, he did it on purpose and his visual tricks are also known from another famous painting. The huge ‘The Ambassadors’ in the National Gallery of London, where a French ambassador and a bishop are depicted with an anamorphic skull at the bottom, is a reminder of the finality of life.In the case of the Giese portrait, these irregularities draw the viewer to the painting, stir an interest and impart a feeling of movement and possible lack of balance under the veneered, still image. I would add that this search for balance, so central in medieval thought, and the realization that it was a result of constant movement and change and was therefore fragile, was very fitting to the mindscape of merchants at the time. They were involved in several balancing acts between various levels of activities, various networks to which they belonged, and the various roles they performed. Not least of which in their capacity as conflict managers.'

Did people in premodern times understand what the past was, and were they able to engage with it or even use it to their advantage? In his influential essay Vergangene Zukunft (1968, in English as Futures Past, 1985), Reinhart Koselleck argued that the premodern (Western) understanding of the past was quite different from the modern one. The past was seen as part of a sequence of cycles in nature and lifetimes, as part of a theological framework which could not be captured by secular chronology, or as a reservoir of timeless tales which could be directly applied as lessons. Judith Pollmann (Memory in early modern Europe, 2017) has rightly pointed out that this essay was a contribution to the philosophy of history, and not an analysis of premodern social practices. She showed in her work that the engagement with the past was rich, widespread and that no sharp line can be drawn between the premodern and the modern in this respect. A complex sense of – and by extension, a sophisticated use of – the past is not only a modern phenomenon.

In our series of webinars, we use the magnifying glass of conflicts to reveal this complexity and sophistication in detail. The authors of the papers demonstrate that there was a premodern understanding of the past which could be very specific and pragmatic, for instance when pointing to the dates of business deals or riots. But there was also an understanding that the past could be perceived and narrated very differently (in accounts of quarrels),  that it could be negotiated (in diplomatic settings) or obliterated (in archives, landscapes or social customs). In our discussions, the magnifying glass is applied to primary sources in order to discuss the role the past played in conflicts. The connecting question of the webinars is ‘What happened in a conflict situation when one put references to the past – history – memory – precedent on the table?’ The enumerated temporal concepts, obviously, are not identical. Some are more fitting to a judicial context (precedent), while others are more fitting to a context where the experience of the past is key (memory). What they do have in common in the context we examine here by way of experiment is a clear function in handling the conflict. [....]

Programme of the early modern 'History in conflicts' webinar 28.01.2022

The webinar starts at 13:00 (CET), through zoom. If you would like to join, please contact j.j.wubs-mrozewicz [at] uva.nl.